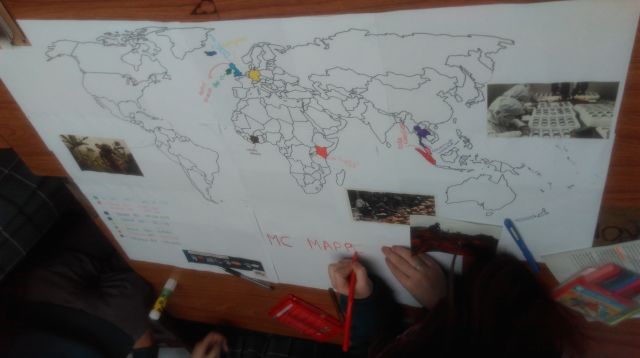 To start the day off Gráinne introduced herself and told us about Water Explorers and what the next 3 classes would be and what we were doing. The first thing we did was listen to information about water litres and how many litres were in everyday objects and foods. Next we  played a game where half of the class went up to the top of the room with pictures of foods and the rest of the class had to guess how many litres of water there was and put them in numerical order. Two students , Hannah and Aaron put together a map of the world which we then used to show were countries were and what the population was. Gráinne told us to pick a package and look at where it was made, she then gave us a leaflet to show how much access to water the country we saw on the packet had in 2016 and in 1990. It also told us the population of the country you had. We filled this information on the map and colour-coded it. Brian came up with the name 'MC Mappers' for the map. The class labelled pictures and countries of the names on the map and what foods came from there. We really enjoyed this workshop and we are looking forward to completing our water challenge!