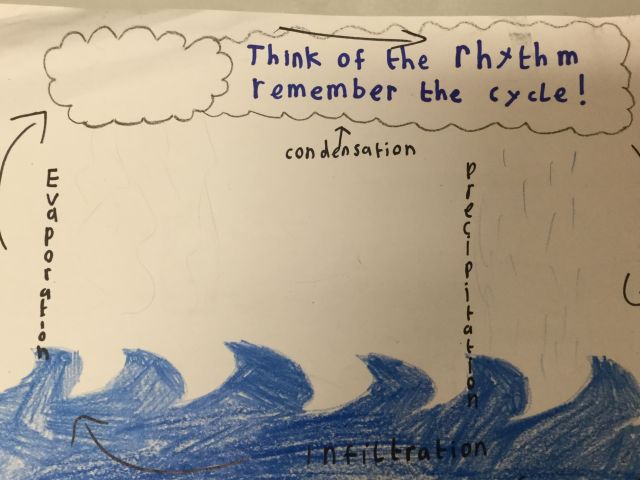 For this challenge we compared flooding in Ireland and Cambodia.   Miriam and Ciarán researched the impact of flooding in Ireland while Oisín and Tom investigated how flooding impacts on people in Cambodia. Oisín lived in Cambodia for many years so he and his family were in a position to offer great insights to this project. This research project was delivered to each class with Emily joining the team to outline the water cycle.

Rainfall in Ireland by Miriam and Ciarán

Most of the eastern half of the country gets between 750 and 1000 (mm) of rainfall in the year. Rainfall in the west generally averages between 1000 and 1400 mm. In many mountainous districts rainfall exceeds 2000mm per year. The wettest months, in almost all areas are December and January. April is the driest month generally across the country. However, in many southern parts, June is the driest. Hail and snow contribute relatively little to the precipitation measured.

How Often Does it Rain?

The general impression is that it rains quite a lot of the time in Ireland, but two out of three hourly observations will not report any measurable rainfall. The average number of wet days (days 1mm or more of rain) ranges from about 150 days a year along the east and south east coasts, to about 225 days a year in parts of the west.

The Water cycle by Emily

Flooding in Ireland by Miriam and Ciarán

Ireland is known worldwide as a wet, rainy country so it stands to reason that we have a lot of floods in Ireland. We found evidence of flooding in Cork as far back as 1853 when parts of Cork city were damaged by a severe flood.

This flood destroyed the first St. Patrick’s Bridge. We also found pictures of flooding in Cork City in 1954. In the last few years Ireland has experienced flooding on a devastating scale leading to the evacuation of homes and businesses. Flooding in Ireland has made people homeless and has caused businesses to stop trading. This can have negative effects on mental health and has caused severe anxiety to families and older people. Roads, bridges, vehicles and farmland have all been damaged in flooding. Flooding has been very costly to insurance companies, the state and to private individuals. The army has been called to the rescue people from floods many times over the years. In December 2015, the army was called to put in structural support on a wall to protect a housing estate from flooding in Bandon, Cork as the river Owenacurra rose. On Jan. 1st 2016, the army was again summonsed to help areas in Cork, Galway, Clare, Kilkenny and Westmeath.

Cambodia by Oisín and Tom

Cambodia as a country is liable to extreme weather conditions such as flooding.   The flooding takes place during the wet season which is from May to November. Most of the flooding takes place in areas near the Mekong and Tonle Sap rivers but in 2011, 17 out of 24 provinces were flooded. Flooding in Cambodia kills people, makes people homeless, destroys crops, destroys buildings, houses and farmland. Over the past 30 to 50 years, climate change has made temperatures rise, making an increase in flooding and droughts.

Although the flooding is devastating, Cambodia makes use of the flooding by using the fertile earth that is left over. Also it leaves a great quantity of fish and snakes. There are different projects to havest rainwater in Cambodia. Throughout Cambodia, rainwater is collected in rainwater jars and tanks.

To prevent flooding in the future, the Khmer people build buildings on high stilts. They also build roads to act as barriers against strong waters. The flooding damage costs around 50 to 60 million for South East Asia but its economies gain around 8 to 10 billion dollars.   Children are not able to go to school because of the very high waters. They are also expected to help with family – for example: help find food, look after their siblings, while their parents salvage the rest of their house Schools are often shut because they are damaged or because they are being used as a shelter for people whose homes have been destroyed. People can get sick easily as the sewage will float up into the streets, contaminating drinking water. They can get diarrhoea, stomach aches and fevers. All the water means that there will be lots of mosquitoes breeding. This will lead to typhoid and dengue and malaria; diseases that can hurt and kill. Luckily, there are many organizations that help like the Red Cross, OCHA, UNICEF and Concern. They make sure that the houses are rebuilt and they give out food and drinking water.

Adults and children need to be educated about how best to deal with flooding in Ireland going forward. A planning bill should be brought in to prevent the building of houses on flood plains. Drainage of wetlands would also decrease the level of flooding in the winter months. Trees planted in the flood basins of the Shannon and the Lee would drain flood plains naturally. We also need more wetlands in Ireland. Children can help reduce carbon dioxide added to the atmosphere by planting fruit and vegetables, turning off lights, TVs, computers and unplugging any gadgets when we don’t need them. We harvest rain water at our school and this water will be used once again when our new garden is planted in the Springtime