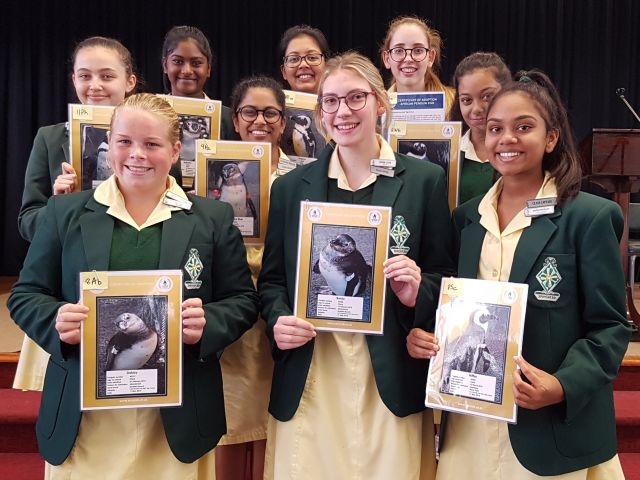 For this challenge we looked at the case studies provided and realised how lucky we are to have clean drinkable water coming out of our tap. Not all people have taps in their houses. Some people may only have access to a communal tap, so have to collect water from it. Others may have to collect water from rivers, often a distance away from where they live, and this water can be contaminated with sewage, oil and various poisonous chemicals from industry or farming. This water can make the families ill if they do not treat it correctly before consumption. Much of the accessible water around the world is polluted. Droughts, as we have had in South Africa recently, also make water scarce.

As our annual Environmental fundraiser, Danville’s Environmental Society (40 members) decided to support SANCCOB’s Adopt a Penguin Campaign. The reason we chose this organisation is that our theme for Eco-Schools for 2018 is Marine and Coast, so we wanted to tie in with this. Our whole Eco-Schools theme for the year is going to concentrate on the effects of plastic on marine organisms. This include micro-plastics and the effects on human health and the adverse effects of plastic on marine organisms, like penguins, eating it, getting tangled in it etc.

A power point was made by the Environmental Monitors to highlights the problem of plastics in our oceans and presented in assembly. We highlighted why the oceans are so important to us and how we are destroying habitats and the organisms (like penguins) in our oceans by our careless actions. We presented some everyday solutions that we can all carry out. These included participating in beach clean-ups, not littering, recycling, precycling (a new word we came across – meaning not creating the waste in the first place) and avoiding single-use plastics. The presentation concluded with a quote from an essay written by a matric learner at Danville, “Lets take back out incredible oceans. The burden is on all of us. As consumers we need to make smart choices, as leaders we need to confront the problem head on. It is up to us to decide whether we want to swim in water teeming with jewels of life or drown in cold waters of death.”

We decided to made badges out of waste bottle tops, collected from the tuck shop, and sell them to raise funds for the penguins. We stuck a layer of sand into the bottom of the bottle top, so it looks like the beach, and stick a shell inside. We then stuck a broach pin onto the outside. Mrs Mann was an avid shell collector in her youth and had many shells that we could use. Posters were made by Environmental Society members and put up in every registration classroom (32) to advertise our fundraiser.

The Environmental Prefects also spoke to the school in assembly and showed them a short video on SANCCOB’s penguins. African Penguins are highly endangered species and without our help may be extinct in a few years time. Our fundraiser was also advertised in our daily notices. The badges were sold for R5.00 by the registration teachers. R2400 was raised in this way. In addition to the R1900 we made selling products made out of waste at la Lucia Mall (reported as an own challenge – precious water), we donated R4300 to the penguins. This was enough to adopt 8 penguins and one penguin egg. The funds are put towards the cost of fish, medication, water and other essentials that each penguin needs during rehabilitation. They will eventually be released back into the sea. This was a very popular fundraiser. The classes that raised the most money had the privilege of naming the penguins and receiving a certificate of adoption with a photograph of the adopted penguin. So we have adopted Splashy (9HE), Tux (8Wh), Skipper (11Mm), Niffler (8Sc), Banjo (10Sa), Sherlock-blue (9Pa), Dobby (8Ab) and Oswold (11Ph). And lastly 12 Be adoption a penguin egg. The eggs will be kept warm and safe till hatched and the newly-hatched chicks will hand-reared until they are ready to be released back into the sea.

We received a letter on behalf of the penguins that we adopted and it goes as follows:

Thank you for 'adopting' and naming us during SANCCOB’s 50th Anniversary year. We are among thousands of African penguins and other seabirds, who have been given a second chance to live and one day, find our life-long mate, and it's all thanks to SANCCOB and You! While it’s difficult to imagine a world without penguins and other seabirds, the truth is that time is running out for us as we struggle to beat the effects of climate change, over-fishing, oiling, predation and human disturbance. Your kind gesture brings hope for our species.

A display was put up in the library by the Environmental Monitors on penguins and SANCCOB.