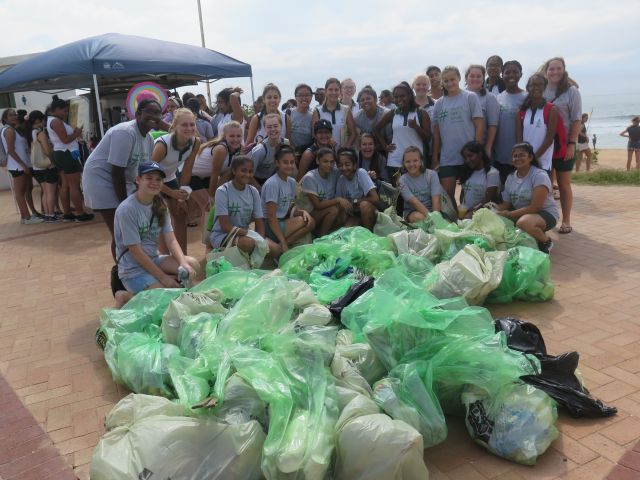 This is our own challenge for Fresher water. Plastics are contaminating our fresh water and the marine environment.

In order to set the scene for Danville’s Eco-Schools theme for 2018, Marine and Coast, Danville was privileged to host Refilwe Mofokeng, a PhD student at UKZN, who addressed the whole school on 29 November. She started by telling us her career path to where she is today. This included studying in Italy and the Netherlands. She was inspired by a grade 10 teacher who said that if she wanted to change the world, she could only do that through following science as a career. This sparked her interest. Refilwe’s PhD research focus is on the impact of waste, especially plastic and micro plastics, on marine life. She gave us a rundown of the problems caused by plastics in the ocean. Refilwe is a socially conscious scientist on a mission to make the world a better place by educating people about what they can do to save the world. She strives to be part of the solution and not the cause, so she goes out of her way to promote conservation education.

Refilwe established and runs her own non-profit organisation which is involved in school food-garden projects, beach and harbour clean-up projects and motivational speaking. She organises harbour clean-ups in Durban every last Saturday of the month and encourages the public to participate. The meeting point is Royal Natal Yacht Club at 8.30 am. We encourage members of the Danville family to join in. We were captivated by her amazing story.

Research conducted by the Environmental Monitors came up with the following: According to the United Nations, “over 30% of marine habitats have now been destroyed” and “at this rate, by 2100 more than half of the world’s marine species may stand on the brink of extinction.”

That small piece of plastic or that straw you may have dropped on the ground could eventually wash into our ocean. Plastic eventually gets broken down into smaller pieces – micro plastics, which act like sponges and pick up toxic chemicals in the sea. Fish, birds, turtles and other marine animals mistake this as food. These harmful chemicals end up in our bellies at meal time – in our favourite foods like fish or sushi. This has harmful effects on our health – it can cause thyroid gland problems leading to weight gain, cancers and other ailments. Plastic may get tangled up in the digestive systems of marine animals causing a blockage. This results in the animals feeling full….but ultimately starving to death. Animals can also get tangled up in bigger pieces of plastic and suffocate or drown.

These problems occur in our oceans and freshwater rivers, causing pollution and thus we have linked this challenge to Fresher Water.

The La Lucia Mall management Company approached Danville to partner with them in their campaign for a plastic free future. We participated in a Beach Clean-up event organised by them on Saturday 17 February in order to create awareness about a plastic free future. About 80 Danville learners eagerly participated (Art club, Interact and the Environmental Facet) and successfully cleared many bags of waste from Virginia Beach.

The La Lucia Mall Management Company also invited Danville to create artworks made from waste, with great prizes up for grabs for the winning artworks. In order to create the artworks the school was asked to collect various items of plastic waste. The art studio was abuzz with budding artists for quite a few weeks as a group of committed Danville learners created artworks from plastic waste in order to create bring about awareness of the destruction of plastic on our marine life. Artistic photographs were also taken of waste at the beach clean-up for the competition. The works were on display at La Lucia Mall from 19-26 March. Some outstanding artworks were created. A piece called “Jelly Fish” was awarded first prize.

Danville learners also educating the public at La Lucia Mall about not using single use plastic bags for shopping, and rather bringing their own reusable bags. The public was also encouraged to hand in old plastic bags which were donated to the Magic Bean Foundation who make products from plastic bags.

The theme for Danville’s fun run on 10 March this year was “under the sea”, following our Eco Schools theme for the year, Marine and Coast. Great Fun was had by all and there were some interesting characters, jellyfish, surfers, groups in bath caps.

Display on plastic in the oceans:

Danville’s Environmental Monitors also put up an informative display in the library on plastic in the oceans.

Danville was extremely privileged to host Sarah Ferguson during assembly on Monday 18th June. She enthralled us with her story of how she developed her environmental consciousness. She told breath-taking stories of how she advanced from competitive to extreme swimmer in order to raise awareness of the state of our oceans, especially with regard to plastic pollution. Her first major extreme swim was between two islands in Hawaii, which ended up being an 18 hour swim, during which she encountered sharks, jelly fish and strong currents. She founded a non-profit organisation called Breathe which largely focuses on plastics in the ocean and she is tirelessly campaigning against plastic straws and other single use plastics. Her big message with regard to plastics is ‘recycling is not enough - reuse or (preferably) ‘REFUSE’. We need to be aware of the impact of our daily choices on the planet. By 2050 there will be more plastic in the oceans than fish if we carry on as we are.

Sarah is also campaigning to stop the use of plastic straws and sells stainless steel reusable straws to raise money for her organisation. BREATHE. Danville learners and staff purchased 50 reusable straws. Danville’s tuck shop has gone plastic straw free this year, thanks to efforts of the school’s RCL. Paper straws are now sold. Plastic popcorn packets have also been exchanged for paper bags. Environmental Society members made posters for the plastic straw free campaign.