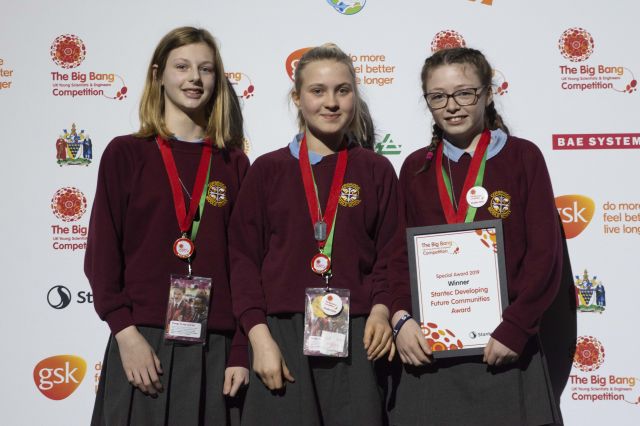 A Water Explorer team from Corbridge Middle School has walked away from the National Science Competition at the Big Bang Fair in Birmingham with an award for their project on sustainable development.

Back in October three Year 8 teams from the school presented their  water-based CREST Award projects at the regional fair in Sunderland. Two teams were selected to go through to the National Finals held last week in the NEC where over 200 projects compete for awards.

At the finals the teams were interviewed in several rounds of judging and were nominated for various special awards based on the quality of their investigation reports. The teams were Jake Kenmir and Alex Kelley with a project on ‘Growing Halophytes’ (salt-loving plants) for the bioremediation soils containing high levels of salt and Scarlett Bell, Ella Gifford and Libby Ward  with a project called  ‘Dyeing to Save the Aquatic Environment’ on the use of activated carbon to remove excess dye from waste water from dyeing fabric.

In the award ceremony Scarlett, Ella and Libby were named as the winners of the Stantec ‘Developing Sustainable Communities Special Award’ for their project on ‘Dyeing to Save the Aquatic Environment’. The girls walk away with a prize of £500 and a visit to one of the Stantec community projects. Their journey began by joining Water Explorers and has landed them a national award!