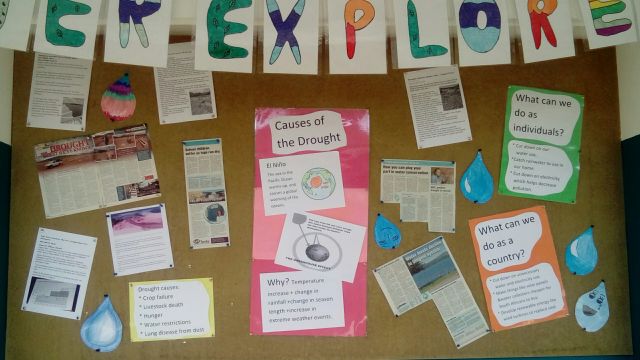 We decided to focus on droughts, as that is such a huge part of our lives now. In our weekly meeting, we discussed the causes of the current drought, those being mainly El Nino and the greenhouse effect. We explored what El Nino is, and why the greenhouse effect would cause a drought. We talked about how drought affects our community. All this information was put on our Water Explorer board outside the Media Centre, along with some ways we can help lessen the drought, even in small ways. We also added articles we found online and in newspapers. Our final task was to look at a locality different to ours, and we chose New York, because that is well-known from movies. This city is due to suffer from severe flooding if the greenhouse effect melts large quantities of ice from the polar regions. It was a huge eye-opener to show a photo of current New York, and then an estimated view of what the city will look like if flooded. We put our collage on the board outside the Media Centre, wrote an article and put it on the Media Centre website and told the school about it on the communicator.