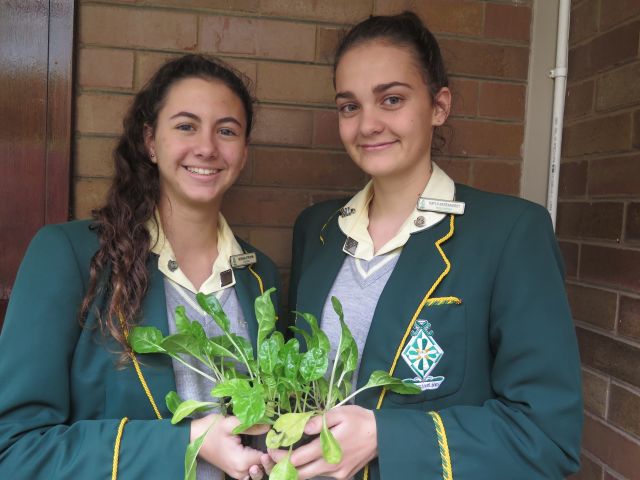 The Environmental Monitors and members of the Charity Committee attended a permaculture course where they learned how to plant by mimicking the patterns and relationships found in nature. We learned about the dangers of pesticides and artificial fertilizers and learned to plant marigolds amongst the vegetables to act as a natural insect replant. We learned about providing natural fertilizer too by layering soil, compost and leaves. We also learned to plant a mixture of vegetables in one area. In order to prevent evaporation of water from the soil we also learned to place hay or grass clippings on top of the soil. This would cut down on the amount of water needed by the plants. We also made all sorts of suggestions about containers to grow vegetables in.
We were planning to plant vegetables this year in our vegetable garden and use rain water from one of our rain water tanks nearby. We organised to have a pipe and tap installed from the tanks. The tanks are at a higher level than the vegetable garden so water could be gravity fed to the garden. But by the time we wanted to plant the vegetables, the water had been used over the holidays to fill the swimming pool!!! We did not want to use municipal water, so decided that the Environmental Monitors and Charity Committee would plant vegetables at home. We watered the spinach sparingly at home with a watering can. We chose to plant spinach only as there is a problem with monkeys in many areas, and the monkeys don’t seem to go for spinach. Also it grows relatively easily from our previous experience. Mrs Mann bought vegetable seedlings and dished out a small bag of compost to each pupil. These were planted at our homes. When the spinach was ready, it was harvested and brought to school and donated to the Domino feeding scheme. We support this scheme every Thursday by making sandwiches. So the spinach was sent with the sandwiches.