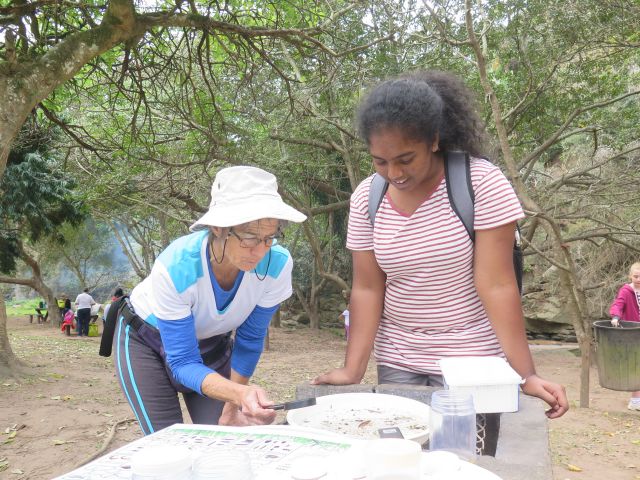 Environmental Society members spent an afternoon discussing the causes of decreasing water quality in our rivers and what can be done to prevent this deterioration. We learned that by using Citizen Science, we can help monitor the water quality by studying the macro-invertebrates present using the mini-SASS method. We did a role play of the ‘Thirsty three’ comic book using role play. This made us aware of causes of water pollution and what can be done to prevent pollution. It also explained how to do a mini-SASS. In order to acquaint ourselves with using the mini-SASS key, we developed a mini-SASS card game. Members were divided into groups and each was given a set of macro-invertebrate cards. Using the mini-SASS key, the teams competed to see who could identify all the organisms on the cards first.
We then went on a day excursion to the Paradise Valley Nature Reserve, where the Umbilo River runs through. We first had a talk by Marlies Craig on ”Insects at work” and we realised the incredible importance of insects to natural ecosystems and our survival. Many of the water invertebrates in the mini-SASS are insect larvae so this tied in well. We also looked for insects in the reserve and identified them. We then had a talk by Lee D’Eathe of Palmeit River Watch. He showed us how to do a mini-SASS and we then went to look at the river. He discussed at length safety precautions that need to be taken when collecting samples. The river could be contaminated with toxic waste or pathogens such as Ecoli from human waste or Bilharzia name a couple of things. A water pipe had burst upstream and the river was very brown. We only spotted a few mosquito larvae, indicating that the Umbilo River is so in very poor condition (critically modified). Lee had brought some living examples of the types of organisms that we should see in the river. We discussed reasons for the poor quality of water in the river. We discussed the fact that it is not just important to monitor the river. We only see the symptoms by monitoring. We need to find the cause and address that. We also discussed that our cities are very poorly designed and factories are next to rivers, so everything, including stuff from our homes, ultimately ends up in the rivers. We ended the day with a guided walk and learned about the biodiversity of the area. A great time was had by all.