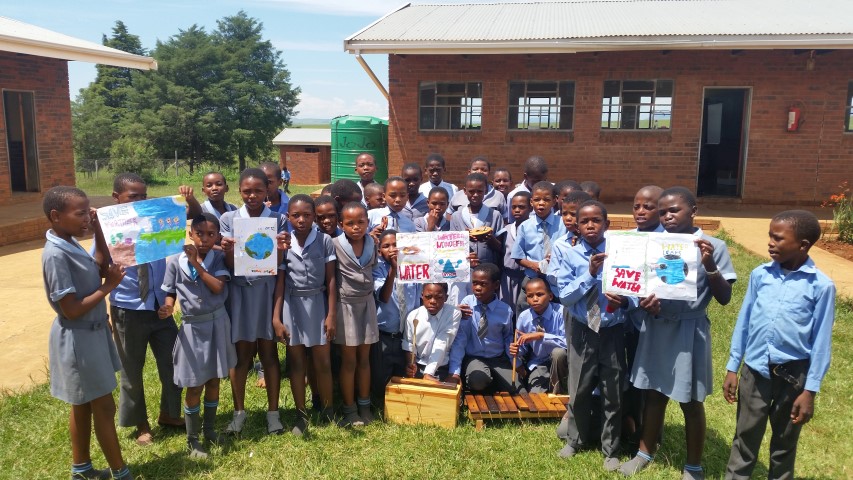 Many schools in South Africa battle with science and maths education.  So it is very welcomed when schools like Bambanani Primary rise above this challenge and take up programmes like Water Explorer!

Bambanani Primary’s Dragon Fly team is situated in the drought stricken Drakensberg Mountain UNSECO heritage site so water saving is a non-negotiable priority at the school. The Water Explorer programme brought renewed vigour to their efforts.

As part of their Fresh water mission, the Bambanani Explorers decided to monitor the health status of the river close to their school, and at the same time develop their science and maths skills. They did this by using the miniSASS tool. Head teacher Mr Mvondlo’s commitment and diligence ensured that the team monitored the river regularly, reporting any variances in measurements and, together with their other water saving activities, turned the school into a model of environmental excellence. It was not long until other environmental organisations heard rumours of this impressive Water Explorer school.

The South Africa Environmental Observation Network (SAEON) approached the team with some attractive proposals. One of which was to set up a Calendar Garden. The Bambanani Dragon Flys observed how four specific plants responded to differences in changing weather patterns driven by climate change on a daily basis. The project taught them valuable skills such as vigorous data collection and how this contributes to scientific research.

Due to their exceptional efforts with the Calendar garden, SAEON then awarded the school a state of the art weather station. This is a first for a primary school in South Africa. With great enthusiasm, and guided by their trained teachers, the Dragon Fly’s started measuring various weather elements, such as wind, speed, humidity and temperature variations and included this data in their science projects. One of their projects was entered into the National Science Expo for which they received an “Excellent Achievement” award!

These fabulous partnerships are some of the incredible outcomes of Water Explorer.  The programme has directly helped nurture an interest and passion for science amongst students and raised the profile of this important subject in an educational system where a boost is much needed.