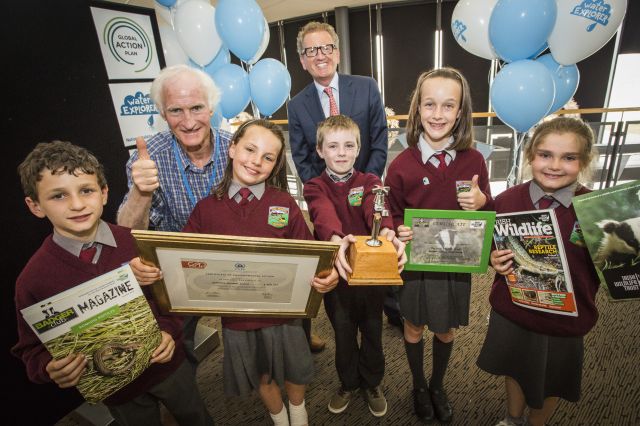 Crowned the Water Explorer 2016 Winners, 3rd Class students from Berrings National School completed all 20 challenges across 4 mission areas. They even created 4 of their own challenges; organizing a class visit from an environmental scientist and designing their own giant floor game and water quiz. Perhaps most impressive was their work with a local business in conducting a water audit and encouraging the restaurant to reduce their water consumption and water footprint. They also actively participated in a global citizen science project, under the ‘Freshwater Watch’ challenge, adopting a local water body and carrying out various tests (tubidity, nitrate and phosphate). The Water Explorers raised €300 during their Water Festival and decided to donate it to a Water Explorer school in South Africa that has no running water; Corrie Lynn Primary School. The money will be used to install drainpipes, which will be connected to a rainwater-harvesting butt (otherwise known as a jojo tank). The students in Corrie Lynn have designed some postcards and our delivery partner in South Africa will post them to Berrings when the postal strike is over.

Well done Berrings! We're so proud of you all!!!

They have won €300 for their school as well as a year's subscription to the Irish Wildlife Trust Badger School's Programme including a full day of workshops for 3 classes in their school, a talk for the whole school and quarterly copies of their magazines! Representatives from Berrings will also travel to London with GAP Ireland to compete in the International Water Explorer Awards in October 2016!