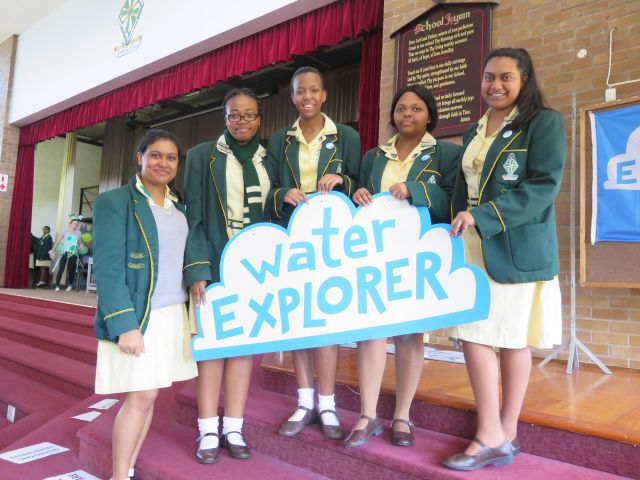 Our water festival was a great hit and was attended by 900 people. This included all learners and staff members at Danville and 25 Glenashley Prep learners accompanied by a teacher.

Our festival started off in the school hall. As it is Danville’s 50th anniversary, we started with a celebration of Danville’s environmental milestones. These include the establishment of the Wildlife Society (1970), the participation in the annual Science Conservation Symposium (from 1980) and the establishment of the present day Environmental Society in 2000. One of the Science Symposium studies included a study of the Virginia Bush area and a proposal to have area declared a nature reserve. In 1985 the area was declared a nature reserve thanks largely to Danville’s efforts.

The rest of the festival concentrated on our water explorer efforts. The programme included the following:
1. Introduction - Danville’s water saving efforts since current KZN water crisis.
2. The Water Explorer video.
3. Power point presentation highlighting ALL challenges done by the school in 2017.
4. Video on municipal water treatment process (Clean up that water challenge). Outlined ALL steps involved in producing clean, safe drinking water that comes out of our taps and made us realise that we should not waste water and take it for granted.
5. Video of raps done by gr 8 class and Environmental Society on importance of saving water (Rap tap tap challenge).
6. Video on fair trade (Fair trading challenge). Fair trade products benefit workers, communities and the environment. Overall message - buy local and look out for fair trade products..
7. Video on how paper is made and where water is used in the process (Water-full secret challenge). Shocked to learn that 1 sheet of paper contains 10 l of secret water.
8. A Skit highlighting the effect of our food choices on the planet, especially the amount of water used to produce a meat vs vegetarian diet.

In the Cally Maddams Auditorium (CMA) an extensive display of work done during Water Explorer challenges set up by the classes concerned. Learners crowded around the pledge board to make pledges to save water on ‘blue water drops’ and 600 pledges were made. The Pump it up challenge has been integrated into the curriculum for grade 8 Technology learners for the past three years and 180 completed this challenge this year. Their working water pumps and research on accessing water in developing countries were a highlight.

Our water festival stood out for the following reasons:
• Every single class and teacher in the school was involved and completed at least ONE challenge. All research (posters, models, photos etc.) done by learners was kept for display at the festival. Teachers and learners at our school willingly participated.
• One and a half hours of valuable teaching time was willingly allocated for the festival by the school management. We are very lucky to have the full support of the school and this made it easy to organise our festival and involve the whole school.
• A representative from each class presented at the festival on the challenge completed by their class.
• Each class was responsible for displaying work they completed during their challenge.
• The Pump it up challenge has been integrated into the curriculum for grade 8 Technology learners for the past three years and 180 completed this challenge this year. Their working water pumps and research on accessing water in developing countries were a highlight.
• The whole school (learners and staff) attended our festival. 25 Glenashley Prep learners were also invited. This will hopefully inspire them to get involved in the programme.
• The programme kept the learners attention by having short, interesting, videos and visuals of each class and their completed challenge work which was pitched at the learner’s level, followed by a thought provoking skit at the end.
• The whole school was actively involved in making pledges to save water at the end of the festival.

Some powerful messages were delivered on how to save water. This included not so obvious secret water used in producing various products such as bottled water, foodstuffs and paper. The skit put forward a powerful message about the environmental (including water) benefits of going vegetarian at least once a week. Easy and tasty vegetarian recipes were displayed in the CMA. The school tuck shop went meat free on the day of our festival and is prepared to support us on other occasions. The school was shocked to learn that over 1 million sheets of paper was used for printing at Danville during 2016. This equals nearly 15 trees and 12 million l of secret water. The classes doing the thirsty paper challenge proposed getting the daily notices and the register emailed instead of printed. Also teachers and learners will be made aware of how to print double sided and a proposal has been put forward that tablets should be used instead of text books. Paper that has been printed on one side is also be reused on the other side before finally being sent for recycling. The number of printers in the school has also been reduced to try and reduce paper usage.

The CMA was a hive of activity at the end of the festival and many pupils actively engaged in studying and learning from the displays. Learners were also encouraged to make pledges on ‘blue water drops’ as to how they planned to save water in future and 600 pledges were made.

The school presently has 9 jojo tanks to store water and pledges to get more. The tanks are used to water gardens, fill the swimming pool and one is piped into the bathrooms to save water. 2l coke bottles were put into the cisterns to save water with each flush. Danville does NOT use municipal water to water gardens. A vegetable garden was going to be planted this year but this has been put on hold due to lack of water in our tanks.

The report back on the alien plant challenge inspired a grade 12 class to clear water thirsty aquatic alien water plants in Danville Lake Nature Reserve for 67 Minutes for Mandela Day.