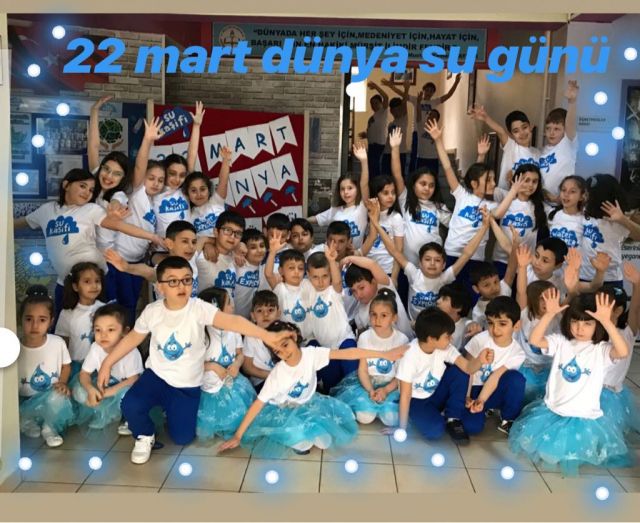 We celebrated the World Water Day on March 22 in our school with various activities, aiming to educate future generations, that is children who are sensitive to environmental problems and who have responsibility to produce solutions to Water scarcity.

The program started with the opening speech of the School Principal Haluk ÖZTEKİN, the slide show where the activities of the Sultans of Water carried out until now within the project, “ Life Source Water” the show of the kindergarten students ,  The Recycle  Catwalk Show ,” Water in the World” Animated Film Show, Drama which is named “ Let’s Have Clean Water”, the show of “ Protect Your Environment “ and after the songs “ Protect Your Water”  and “ The Water Belongs to Children “ the ceremony for those who entered the painting contest on World Water Day, followed by collective photo shoots in memory of World Water Day. Then we had fun with children in the garden, accompanied by water-based musics.

The water problem will have the biggest problem in the future.

Water is a vital resource for the continuity of the nation by being the most basic necessity of the individual and the source of the main economic activities.The United Nations (UN) General Assembly decided to celebrate 22 march of year as "world water day "due to the increasing importance of water in the world which is organized in Rio de Janerio in 1992 by the name of UN Environment and Development Conference.World Water Day has been celebrated on 22 March 1993 and every year with different themes. Some issues were discussed like

"Nature for Water: Developing nature-based solutions to water problems". "How can we reduce water pollution, flood and drought? The answer is in the nature! This themes was used, and we shared our work with the audience by going through this theme in our program. We are proud of having a day full of happiness and peace so we say;

Every Drop You Keep is

22-mart-10.pdf
|
Likes
(3)
Back to News
|
Likes
(3)
Previous article
Next article
Water Explorer is a Global Action Plan initiative
in association with