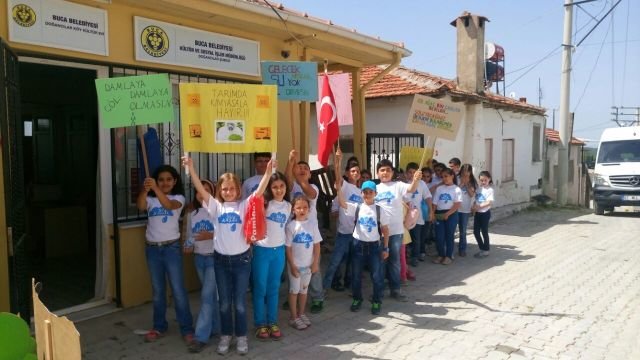 Concerned about the impact of pesticides and fertilisers on water quality, Water Explorers from the Serif Tikvesli Primary School, Turkey, decided to convince the farmers in their region to avoid using chemicals in their farming activities. To achieve this the team created a short film called Say no to chemicals in agriculture, which they showed to farmers in nearby villages and were really successful! Because of their success they decided to visit two further villages in the Buca district of Izmir. They asked farmers to watch the short film and then persuaded them to commit to restricting their chemical consumption in agriculture. The farmers thought it was a great, creative idea. So, the Water Explorers performed in the village square and attracted a huge number of farmers.

Thanks to the students’ hard work and advocacy, they even appeared on two national TV channels (TRT News and TRT1)! After their success with the press and media, interest continued to rise on the internet and through social media, with ever growing numbers of farmers interested in changing how they use chemicals in their farming practises.