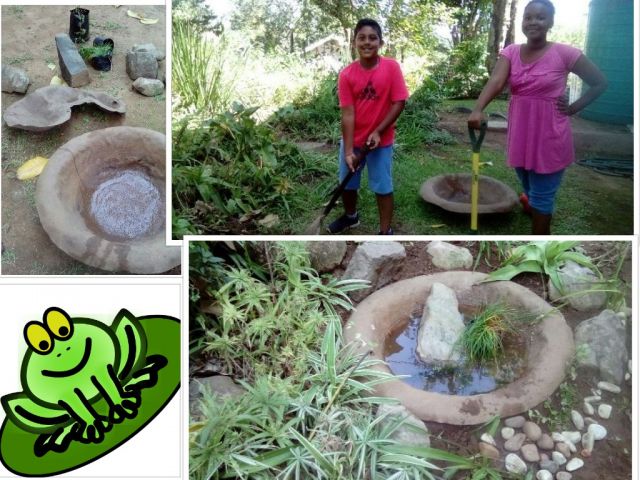 We already have a small pond in our indigenous garden, but we decided to put in another one, as we have been donated a fiberglass waterfeature, and the base is ideal for a small pond.

We have three groups in our Green Team; The Bulbine, Plectranthus and Salvia groups. Two of the Salvia group was able to help with the pond.

It was a very hot day, and we were glad that most of the garden had afternoon shade. We decided where we were going to put the pond, especially making sure that it wasn’t under the large Apodytes tree that sheds copious amounts of tiny white flowers. We measured the hole and started to dig, but came across a large root. We moved it a little to the left but there was a second large root. Sigh!

The third time, we only came across smaller roots that we could chop in half. The weather was getting hotter by the minute, but we managed to dig the hole, place the pond and plant around it.

We chose an Arum lily, a large green Hen and Chicken and a larger species of Bulbine than the common garden one. We added some pond weed, ensuring that there is something on the bottom of the pond and inside the water and floating on the top.

We placed a large sloping rock so that the froggies can get out. We want to add some fish to keep the mosquitoes at bay in the next few days.