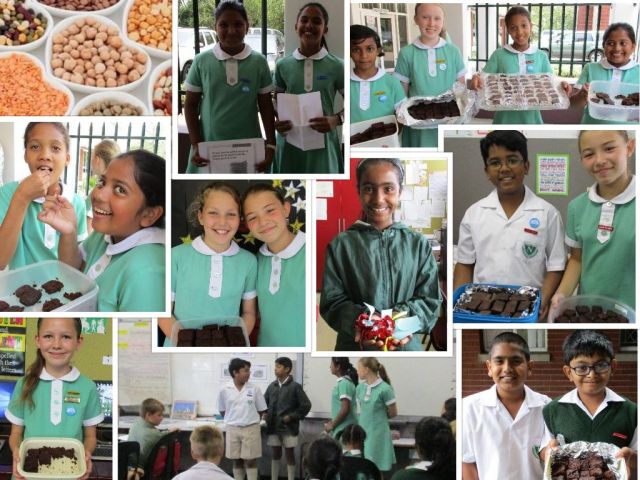 Pulses are healthy and waterwise, and a lot of our learners eat them in their normal meals. We decided to make pulses accessible to those who wouldn’t ordinarily have them as part of their food.

During two Water Explorer meetings, I had the most delicious chocolate brownies made by Erica Brown of Solfood Vegetarian Catering Company. I am always collecting recipes, and she very kindly gave me hers. We modified it slightly by using a tin of chickpeas rather than the ones you had to cook first.

The bakers in our team enthusiastically baked brownies and shared them with their class. Those Water Explorers who didn’t want to bake shared a pulses lesson with the class at the same time.

During two breaks before that, we had our lesson about pulses in our meeting.

We asked the question, “What are pulses?”

We then had a quiz using pictures of pulses to see if everyone could identify them, and when reviewing the answers, discussed how they were cooked, what they were used in and how they tasted.

We talked about nitrogen fixing, and looked at pictures of the roots of legumes.

We did the activity about different types of food, and parts of the plants that are used. We did some research on terms like calorie and protein.

Everyone was very doubtful about the brownies at first, but they soon disappeared when they realized how delicious they were! The recipe will be shared with the rest of the school on our Facebook page.

Here is our modified recipe for anyone who wants to try.

Drain the chick peas and blend until smooth. Beat the egg whites with ¼ cup sugar until it forms soft peaks. Slowly add another ¼ cup sugar and beat until it is stiff.

Place chickpea puree in a bowl. Sift in cocoa and baking powder, and then add the coconut. Mix in egg yolk mixture. Add half the egg white and fold slowly. Add the rest of the egg white, taking care to fold and not mix.

Grease or Spray and Cook a baking tray or dish. It needs to be at least 30cm across and 4cm high. Bake at 180 C for about 20 to 30 minutes until the sides of the brownies start coming away from the sides of the pan. Wait to cool before moving to a serving dish.