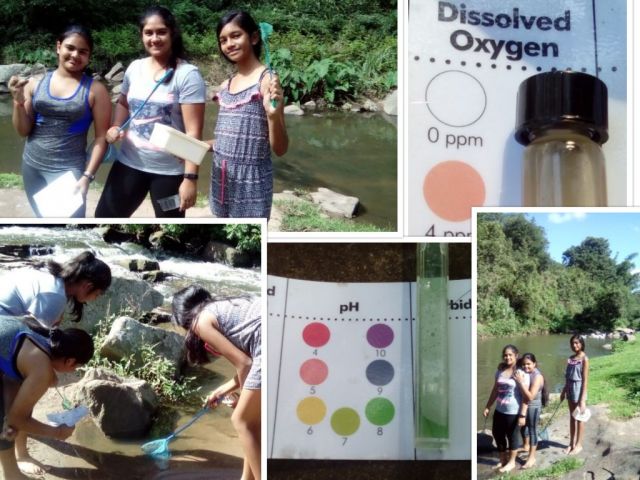 I took only three learners to the Umbilo River in Queensburgh, as I had to transport them in my car which is very small! Also I chose girls who were very responsible and would take the task seriously. I did it a few years ago with a much larger group and developed several new grey hairs when learners were jumping off rocks!

We arrived at the river one warm Tuesday afternoon with snacks, water and an assortment of nets and containers.

I at once noticed two differences between the river now and what it had been like in October 2017 when we were there last. There were virtually no red worms this time, whereas before there were hundreds lurking on all shorelines. There were also thousands of tiny fish which I have never seen in this section of the river since we have been coming (2016) In 2017 there were a few guppies.

We found one red worm, a water boatman and a damselfly larvae. There were many dragonflies but no larvae in the water. Crabs were absent, except for half a dead one on the side of the river. I remember there being crabs in the 1980s in a section of the river closer to the source. The Umbilo River and its tributaries unfortunately flow through Westmead, Maxmead and another industrial area in Pinetown.

pH was 8 and the dissolved oxygen reading was definitely pinker than 0 but not as pink as 4.