Team of the Month
Congratulations to Kingsmill Primary School for being awarded National School of the Month for the UK. This team are really making their way up the leader board and have already completed the Precious Water Mission and have shared what they have been up to through newsreels.
Click here
Congratulations
Kingsmills
Resources
Case Studies
Open Top Teams

Water Explorers Workshop
Posted by Liss Junior School, United Kingdom on 6 May 2016
Post related to A day in the life, Global Water 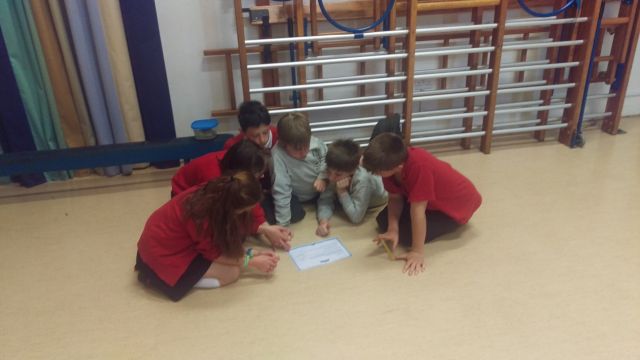 Liss Junior School were extremely lucky to be visited by Anna Beasley last Friday. Anna ran two Water Explorers workshops, the first with Years 3 & 4 with a focus on 'rap tap tap.' The second workshop with Years 5 & 6 included the challenge 'A day in the life.'

All of the children really enjoyed learning about water from Anna. Here's a report from two of our Year 5 children:

On Friday, some people were picked to go to a Water Explorers afternoon. We did fun activities to help us to save water. Here is an account of the afternoon.

When we got into the hall, there were pieces of paper laid out. We sat down and started watching a video. It was explaining what Water Explorers were and what they did. Anna, the lady in charge of the afternoon, paused after a bit and asked us to do the first activity. She would shout out an activity involving water and we would have to go to the piece of paper which had the correct amount of litres on it. We did this about 10 times. Then we went and continued watching the video.

After we had watched the video for a bit longer, we then played a higher or lower game. We were shown some food items and had to guess how much water was needed to make it. Afterwards we finished watching the video. We watched a video about a girl who lived in Ethiopia and what her life was like. We were then given a pack of cards to make a timetable for that girl’s life. Then it was break time.

After break, we were given a pack of counters to represent a litre each of water. We were split into different groups and each group was given a country. Here we were given a child’s day in that country. The countries were: United Kingdom, USA, Ghana, India and Uruguay. The United Kingdom had 180 litres, the U.S.A had 380 litres and the other three only had 40 litres. We then had to go about our day, doing activities involving water. The USA used majority of its on giving water to the horses and using 150 litres on a paddling pool. The United Kingdom spent 35 litres on a water fight and the only three which didn’t run out of water, only had 40 litres. Afterwards, we had to make a pledge to use water less. Overall, it was a really fun afternoon.

Opportunities
Completing Challenges will help you climb the Water Explorer leaderboard. In addition, your project work can be used to support CREST and Eco-Schools Awards.

CREST Award (British Science Association)
Each year, over 32,000 CREST Awards are undertaken by 11-to-19-year-olds, giving them opportunities to explore real-world science, technology, engineering and maths projects in an exciting way.

Contact the Water Explorer team through schools@waterexplorer.org with any questions on how Water Explorer can help you achieve sustainability success.